It’s just before 10am in the foyer of the Studio Underground. Saltbush co-director Jason Cross gathers the younger audience members around for a pre-show briefing. Amongst other things he explains that we will all need to take our shoes off prior to entering the theatre so that we can step on the “special carpet”. The children nod solemnly, except for one who asks, “Why is it special?”

What’s special about the “carpet” is that it is both animated and responsive to movement. A butterfly flits along its length, its wings richly coloured in indigo, violet, scarlet. Floating and multiplying yellow discs expand and spin when touched, then turn into turtles that swim away. A river is made of pale blue streamers that ripple and twist in response to movement. A scatter of inky patterns seems to be a physical representation of the rich vibrations of a didgeridoo… or is it the other way around?

This is a magic carpet and it takes its cargo, children and adults, on a ride through Aboriginal Australia – river country, the city, the desert and the sea, using a blend of dance, music, theatre and interactive animation. 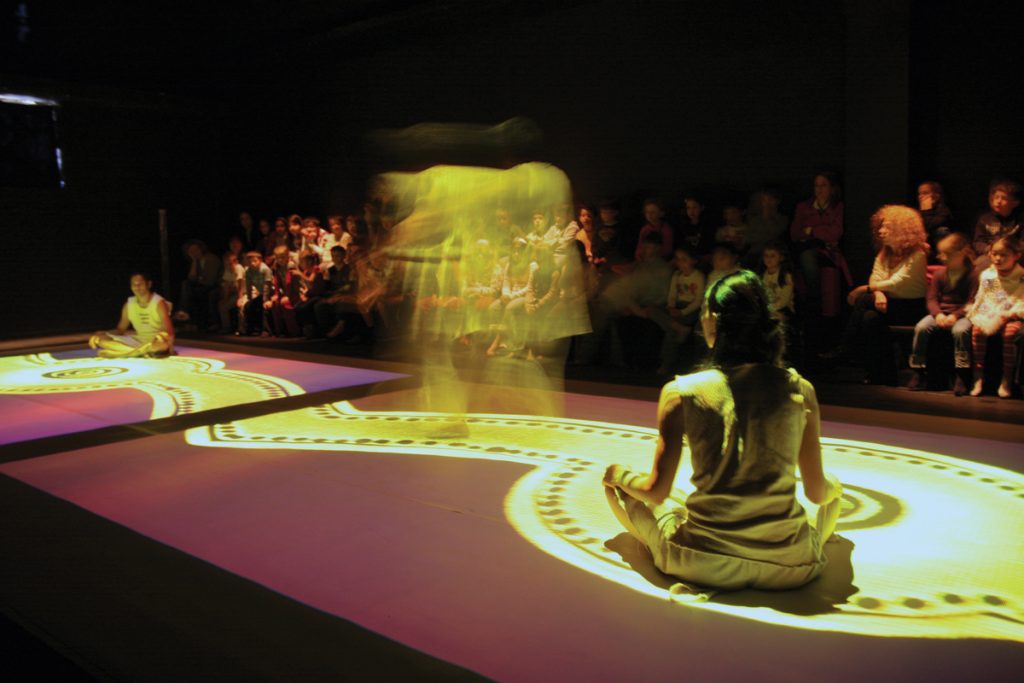 Created by Italy’s Compagnia TPO, Australia’s Insite Arts, and a team of Aboriginal artists, and directed by Davide Venturini (Italy) and Cross (Australia), Saltbush has had various incarnations both in Australia and internationally since its premiere in 2009. Guiding us through the different landscapes on this occasion were narrator/singer Sharni McDermott, and dancers Caleena Sansbury and Sani Townson. Amidst a rich blend of sounds – layers of didgeridoo, percussion, strings, rushing water, waves – McDermott’s voice rang bell-clear through Lou Bennett’s songs. Singing or speaking she was at times otherworldly and mysterious, at others playful and inviting. Deon Hastie’s choreography variously tumbles through waterways, ricochets off urban streets, shakes and shimmies in the desert. Sansbury and Townson performed it joyously. 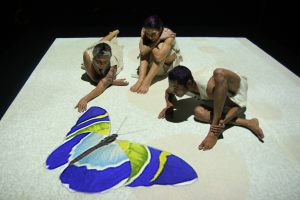 Equally, the three performers shone in their roles as facilitators, evidenced by the trust and delight of the young audience members (and a few adults) who accepted the invitation to engage in the performance at the show viewed. Leaping on to yellow lily pads, dodging road freight, following ever-changing paths, revelling under star-soaked canopy, the child participants become part of the choreography. As often as the interactive carpet responds to movement, so too, it directs that movement. A wonderful moment at the performance viewed saw a group of children, each busily engaged on his or her own trajectory, stop as one, choreographed by the light beneath them.

Saltbush is a transporting experience for young and old alike. Highly recommended.

Nina Levy has worked as an arts writer and critic since 2007. She co-founded Seesaw and has been co-editing the platform since it went live in August 2017. As a freelancer she has written extensively for The West Australian and Dance Australia magazine, co-editing the latter from 2016 to 2019. Nina loves the swings because they take her closer to the sky.