Seesaw would like to acknowledge the traditional custodians of this land and we pay our respects to their Elders past, present and future for their unique contribution to the cultural life of communities across Australia.
Continue 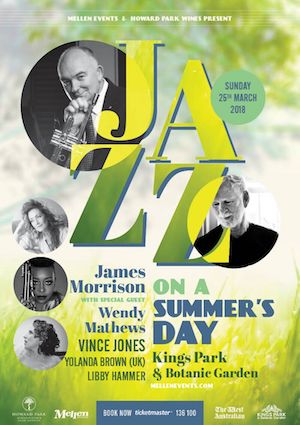 The new event series, JAZZ ON A SUMMER’S DAY is here – featuring Australia’s own trumpet maestro James Morrison live on stage with the iconic Wendy Matthews whose most recent Billie Holiday tribute Billie & Me has been wowing fans all over the country.

Joining them for this spectacular afternoon of jazz in the park is the genre defying Vince Jones, along with the UK’s leading female saxophonist YolanDa Brown and Perth sensation Libby Hammer.

Bring a picnic and enjoy some of the finest Australian and International jazz artists currently touring at Perth’s famous Kings Park & Botanic Garden.

The name “James Morrison” is known throughout the world for his sheer brilliance as a jazz musician and an all round entertainer. He is constantly on the move, touring everywhere and anywhere fine music has an audience. His recordings are best sellers and James works with the cream of the world’s best performers. Ray Brown called him “The Genius” and Dizzy Gillespie called him “One of The Best” but Wynton Marsalis summed it up: “Man, James Morrison can play!”

James Morrison is, by anybody’s standard, a virtuoso in the true sense of the word. Besides the trumpet, this multi-instrumentalist also plays piano, all the brass, saxophones, and double bass.
At the age of seven, he was given his first instrument, at nine he formed his first band and at thirteen he was playing professionally in nightclubs. His international career developed just as quickly. At age sixteen James debuted in the USA with a breathtaking concert at the  Monterey Jazz Festival. With interests so broad and a career so filled with highlights it seems that James Morrison must have done just about everything he could want to do – but not so… When asked, “What is there left to do?” James’ reply is typically “This is just the warm up!”

With an extraordinary wanderlust and spirited, gypsy vibe to her life, Wendy Matthews seemingly has done it all, and then some. Jingles, voice overs, firsts, lasts and everything imaginable in between and yet she is down to earth, real and one hell of a talent!

It is hard to believe with a friends list of the who’s who of a vast array of genres, like Cher, The Little River Band, Sarah McLachlan, Rod Stewart and more. But Wendy knew as an old-soul of four years old that music was her calling, a simple, divine truth that resonates in her life and music today.

“…It’s taken time to push through some personal barriers, I’m not a natural exhibitionist; I just loved music and singing.”

In the winter of 2012, singer songwriter Wendy Matthews went into the Stuart Piano Factory in Newcastle with Brendan St Ledger on piano and Greg Royal, standup bass. The trio emerged after two days with an album of live recordings and realised they had
captured a long loved but never delved into side of Wendy’s music history.

The circumstances they recorded in allows for an intimate and introspective translation of some classic and not so classic Billie Holiday songs, an iconic woman whose soul and music has been long admired. In the centenary year since Ms Holiday’s birth, Wendy Matthews is proud to release Billie and Me on her very own Barking Bear record label.

Vince Jones has set the benchmark for Australian Jazz singers since his emergence in the jazz clubs of Melbourne in the late 70s and early 80s. His 20 album, international career has never hesitated in its musical evolution – a career played in the moment. He is that rare genre-defying artist who creates music without borders.

From Iris DeMent’s folk “Our Town” to his original piano heavy, new age “Wonderworld”, he comments, sometimes uncomfortably, about the world we live in, from an unashamedly idealistic perspective. His intuitive readings of the Great American Songbook are sensitively true to composer and artist. He is a wonderful trumpet player. His style has developed a distinctive reserve and subtlety. He plays a little less and draws a good deal more from it than he did in early days.

YolanDa commented: “I fell in love with Australia, last time I was here and I just had to come back to see more of the beautiful country and this time I am there for the entire month of March. The audiences were so warm and the reception was mind blowing… who knows, I might just move to Australia after my tour.”

Undoubtedly the west coast’s most sensational jazz vocalist, Libby Hammer is a gorgeous mix of silky-smooth, soaring, and silly, with good looks to boot! Along with her band of dreamboats (who never fails to impress the ladies), Libby belts out a mischievous mix of
cabaret jazz, soul-drenched blues, jumpin’ jive and fifties’ groove, so before long, the whole joint is swingin’ and swayin’. Libby’s bands have won six consecutive WAMIs (to mention just one award), so come along and see why.

You can read our reviews for free.

But we need to pay our journalists.

Make a tax deductible donation by 31 March 2020 to support the payment of Seesaw’s outstanding arts writers.