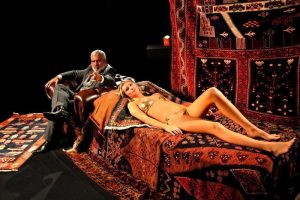 In his video piece Scratch an Aussie, Richard Bell explores racism in Australia through a beguiling mix of playfulness, mimicry and word association.

Bell plays a psychiatrist who himself seeks counselling to process the apparently heavy nature of problems his white-Australian clients face on a daily basis and his guilt at charging them for advice. In a symbolically white, clinical space, Bell recounts these ‘problems’ to his fellow Aboriginal practitioner. These recollections are interspersed throughout the narrative, delving into issues such as a stolen iPhone with a seriousness the audience soon recognises as illusory. His self-obsessed clients recline leisurely on Persian rugs, wearing nothing but golden swimwear as they confess their fears; they are exposed in one sense but wholly comfortable in another.

The client who had her iPhone stolen describes how violated she feels that something was stolen from her, and how she is worried that there are people out there in society who take property from others without a sense of shame. The psychiatrist is depicted as being understanding of these wrongs. When you realise the parallels drawn by the complaint, you cannot help but feel impacted by a sense of collective shame: it is the white-Australians who claimed ‘terra nullius’ when they ‘settled’ Australia. Nobody’s land.

This ignorance is echoed during word association with another client, who is unperturbed at the phrase ‘vacant lot’. Here the psychiatrist does rebuke his client, saying ‘No, it belonged to me’. The word association and jokes bring forth connotations in a blunt manner, unapologetically throwing racist comments at the viewer to show how deep-veined racism still is in our society. ‘What do you call an Aborigine with a tin can?/ A home owner/ What do you call an Aborigine with a bunch of tin cans/ A real estate agent’. The viewer feels uncomfortable as the psychiatrist laughs with his white clients – jibes about theft, substance abuse, poverty. Certainly, I couldn’t help but think of the variations of these jokes I have heard, or still hear, in my everyday life, as well as the stereotypes that are so ingrained in common usage that we as a society no longer think to question them.

Here lies the power in this short but evocative video. If you scratch the surface of our country, peel back the first layer, you’ll see a snippet of what we have collectively glossed over. It is not Bell who is making us squirm – he is merely holding up a mirror. Dig deeper and we are unlikely to admire what we know has been there all along: a white face staring at the camera, laughing instead of helping. Despite how far we may have come in some areas, Australia still has a lot of work to do.

‘Scratch an Aussie’ is showing at the Art Gallery of Western Australia until 10 September 2017. Free admission.

Belinda Hermawan is a graduate of UWA Law School (2009) and a fiction writer whose short fiction has been published in Australia and the United States. She is a summer school alum of Parsons, The New School of Design in New York. Favourite piece of playground equipment: playground car on springs!