Review: A Simple Space by Gravity and Other Myths ·
The West Australian Spiegeltent, The Pleasure Garden, 28 January 2018 ·
Review by Nina Levy ·

A confession: I may have fallen a little bit in love with the eight performers of A Simple Space.

I’m sure I’m not alone – one of the most endearing qualities of this show was the way in which the cast members regularly exchanged cheerful grins, complicit winks and even casual asides to audience members, occasionally mid-stunt.

But I’m getting ahead of myself. Presented by Adelaide-based contemporary circus company Gravity and Other Myths, A Simple Space is, in some ways, a simple show. Unlike traditional circus shows, there are few props utilised by acrobats Martin Schreiber, Lachlan Binns, Jacob Randell, Jascha Boyce, Lachlan Harper, Mieke Lizotte and Jackson Manson. Clad in neutrally coloured casuals, the cast are responsible for adjusting their own lights as they perform. Even the live music is relatively minimalist – one musician (composer Elliot Zoerner), a sparse drum kit and a lap top. 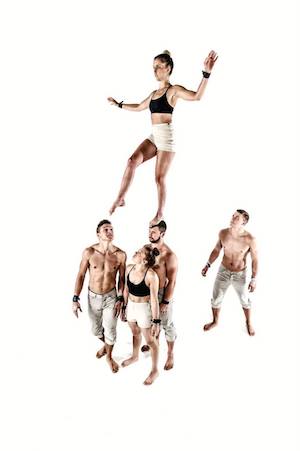 But don’t be deceived – out of this minimalist set-up, Gravity and Other Myths extracts maximum acrobatics… and maximum fun. Because no matter how audacious and astounding the physical feats, at the heart of this utterly entrancing show is the simple pleasure of playing a game. And this, to me, is where the appeal of A Simple Space lies… for the performers, it seems that it’s at least as much about the thrill of the game as it is about the thrill of the ride.

And what a ride it is. A game of “Falling” starts innocently enough – don’t let anyone fall to the ground – and concludes with performers dropping, heart-stoppingly, off the top of three-tier human towers. An act that begins with a performer using his colleagues’ supine bodies as landing pads becomes increasingly daring, culminating in a somersault that starts and finishes on the palms of another performer’s hands. Bodies become building components of moving sculptures comprised of impossibilities, which teeter to the brink before exploding into a cloud of airborne people.

These spectacular feats are interspersed with all manner of joyful play – a skipping rope tournament with a twist, a breath holding competition, a handstand competition in which the air is suddenly filled with flying colour, a Rubik’s cube solved from an unusual perspective. (“Gives new meaning to the term, ‘I could do it standing on my head,” whispered my plus one.)

The musical accompaniment, provided by Zoerner, ranges from rousing beats to a magical underwater soundscape. Zoerner flits in an out of the action front of stage, his super-charged body percussion a crowd favourite.

The grande finale, a play on the Australian childhood tradition of a “milkshake” (you know, the one where two people grab the wrists and ankles of another and swing them), is a kind of souped up trapeze act. Bodies swing, arch, swoop, aeroplane. The world is whirl of limbs and just for a moment you know it…

Don’t miss ‘A Simple Space’, playing The West Australian Spiegeltent in the Pleasure Garden until 11 February.

Nina Levy has worked as an arts writer and critic since 2007. She co-founded Seesaw and has been co-editing the platform since it went live in August 2017. As a freelancer she has written extensively for The West Australian and Dance Australia magazine, co-editing the latter from 2016 to 2019. Nina loves the swings because they take her closer to the sky.