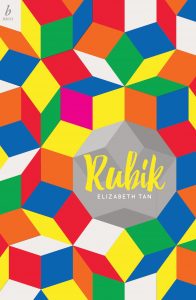 Despite being an unorthodox story-telling method, the term “novel-in-stories” still comes with its own set of expectations: namely, a series of short stories in which multiple perspectives of the same world drive and complete an overall narrative.

Perth author Elizabeth Tan delivers a much more interesting puzzle with her debut Rubik (Brio Books). We begin with the death of Elena Rubik at a Gull service station in a familiar neighbourhood, before being introduced to an anime-like multi-purpose octopus, and a piano teacher’s mysterious disappearance. The reader can be forgiven any confusion; while Tan’s prose is imaginative and deftly executed, like the first few “test” clicks of Rubik’s cube, it is unclear what these initial moves mean for the overall picture.

This is a book in which reader patience is greatly rewarded. Tan has a light touch with the connecting elements between these stories – the references are there to be picked up and unspooled, to run with and interpret. A conspiracy captured in film starts to emerge. Layers of reality thatch with social commentary and explorations into sub-cultures. As Jules Valentine – Elena’s best friend – advances on an adventure involving many moving pieces, the reader can almost hear the slide of the Rubik’s cube’s layers as the novel’s narrative clicks into place.

The self-contained nature of the chapters makes it easy to pick favourites.  “Coca-cola birds sing sweetest in the morning”, for example, is an inspired, piece of magical realism, in which we meet Audrey the mechanic, who can repair corporate-sponsored animals:

The sky is still blue, the street is still silent; somewhere in the city the Citrus Man still cycles, and Audrey’s most significant days are those that begin like this one, without portent, glowing with the kind of ordinariness on which she leans entirely. But today as her eyes fall upon the bird in the basket, as she lifts it from the pile, something in the universe pivots quietly, creaks imperceptibly, like the wheels turning a cassette tape. (p197)

“Everything That Rises” is also compelling, despite being, essentially, an enquiry into the origin stories of both the Homestyle Country Pie and the Australian five cent coin. Considering Rubik as a whole, it is apparent that Tan possesses not only the ability to make the everyday normal magical but the ability to also normalise magic.

From a local’s perspective, it is refreshing to read Tan’s Perth-based fiction. There is a certain delight in reading a story set in our streets, cultural precincts, shops and underground. And by underground I mean the sub-cultures under-represented in mainstream fiction: anime, online gaming, fan-fiction and behind-the-scenes of independent arts.

Like a Rubik’s Cube, not all secrets are revealed. One cannot see the cube’s contents; only its surface in whatever sequence it has been arranged. But in daring to be this contemplative and experimental, Tan takes the reader on an unexpected journey and arguably encourages her fellow practitioners to do more. Rather than merely push the envelope, perhaps fiction should make it twist, morph or even sing.

– A shorter version of this review was first published by Writing WA  earlier this year.

Belinda Hermawan is a graduate of UWA Law School (2009) and a fiction writer whose short fiction has been published in Australia and the United States. She is a summer school alum of Parsons, The New School of Design in New York. Favourite piece of playground equipment: playground car on springs!