If you’re uncomfortable with nudity, you may want to avert your gaze in Freo this weekend.  Actually, never mind, it’s just clever costuming!  Varnya Bromilow recently caught up with Andy Burden, Head Nude aka Director of Natural Theatre Company – a British theatre company that prefers their comedy laid bare.  They’re in town this weekend for the Fremantle Street Arts Festival.

If you had to, what would you rather do:

A. Eat a stew made of chopped liver, finely diced worms and earwax

B. Go to work and sing your heart out in front of all your colleagues with no explanation

C. Wander around the streets naked for 30 minutes

I would choose A.  No question.

For a posse of bold Brits this would be a no-brainer.  Option C – easy!  The Natural Theatre Company has been doing nude runs all over the world for the last 45 years.  And okay, they aren’t actually nude – they’re wearing extremely realistic costumes.  But still, it leaves little to the imagination.  Director Andy Burden explains that the intention is not to make people feel weird or freak out, it’s to laugh.

“Our aim is to make people smile,” Burden explains on the phone from the UK.  “In our street theatre we focus on comedy and making people around us feel comfortable so they can have fun.”

So, how on earth does one come up with the idea?  Counting back, I guess it was 1973, which explains something but still…

Burden laughs.  “The idea for the Nudes originated from our naturally cheeky sense of humour, the characters are very charming, very British people who do not realise that they are naked, which people seem to find hilarious.” 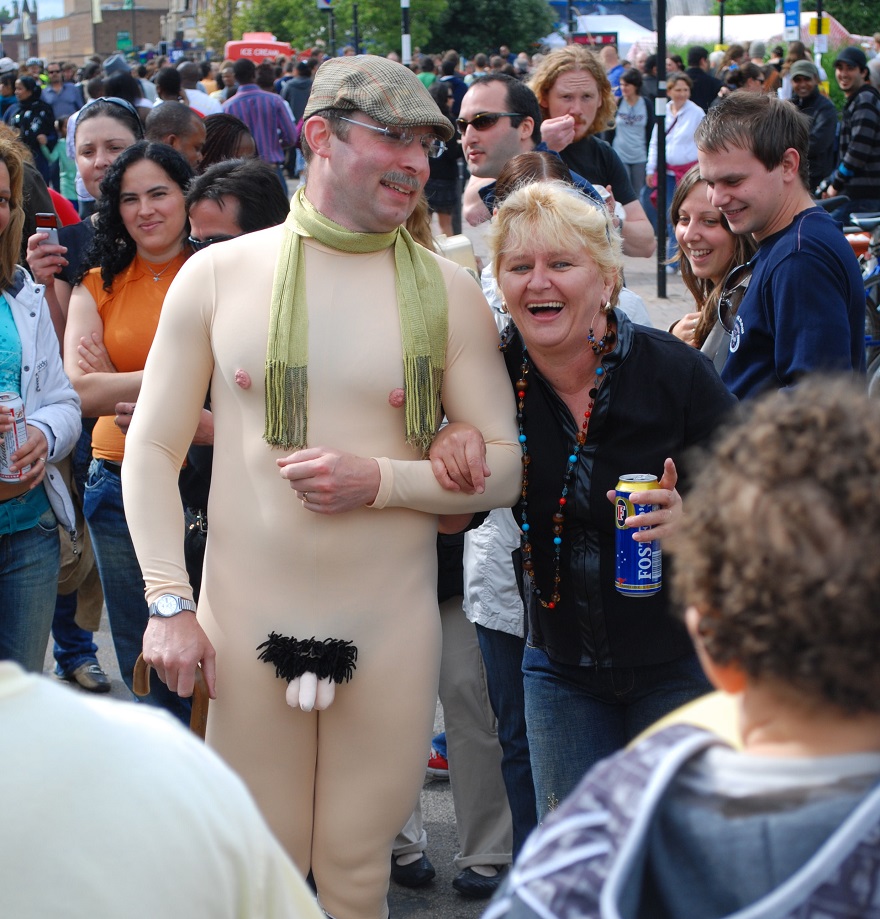 The costumes are deliberately silly, but it definitely requires a double take to realize that the person you are gawking at is not actually nude.  Which begs the question – do audiences realize immediately that costumes are involved?

“It depends how far away from the action you are!  But yes, once you get closer it becomes clearer.  The fact that they are ‘nude’ adds to the comedy but these characters have a great personalities too.

“The Naturals designed the costumes many years ago,” Burden explains.  “We create them ourselves – one of our longest serving actors makes the, er… ‘accessories’.”

The nudes are a very diverse bunch, physically speaking.  From your slimline versions to other more portly forms, the representation really runs the gamut of physicality.  Burden explains that this range was intentional.

“We didn’t want to shy away from what nudity is but our characters make the costumes comical,” Burden says.  “Body shape is completely irrelevant, we celebrate all shapes and sizes!  The Natural Theatre Company has a diverse range of actors in terms of age, ethnicity, and body shape. There is no particular ‘type’ in terms of appearance, all of our actors play all of our characters…over 100 scenarios!”

With such realistic costumes, not much is left to the imagination.  So why cloak up at all?  Did they ever consider going the whole hog?  In the early 70’s you probably could have gotten away with it!

“Not really,” Burden laughs.  “A large part of the comedy lies in the fact that they that are not really nude – it is the surprise our audiences have thinking that the actors might be and then the realisation of what is actually going on.”

It’s easy to imagine the gobsmacked response of children to the show.  But when I ask Burden about the shock value, he says any initial eyebrow-raising subsides surprisingly quickly.

“Less shock, more laughter,” he says.  “After a while it is not even about the ‘nudity’, they are such charming characters that people completely forget and just end up chatting to them.”

Any company that has lasted 45 years can be counted as a serious success.  The Naturals have toured all over the world, spreading their innocent glee.  Considering how much attitudes towards nudity vary from culture to culture, have they noticed a difference in reception, depending on where they’re performing?

“In our experience, the Nudes always get a great reception, people completely understand the tongue-in-cheek comedy,” Burden explains.  “Sometimes clients can be nervous about booking the Nudes but every single time we get amazing feedback. They are a great ice-breaker!”

But it’s not all about (the illusion of) getting one’s gear off.  The Naturals have expanded their enterprise into a drama school, education and workshops as well as a sub-company Natural Diversions that feature performers who are disabled.

Laughs aside, it seems the over-arching theme of the Natural Theatre Company is acceptance.

You can catch The Nudes all this weekend at the Fremantle Street Arts Festival.