There are people eligible to vote in Australian (and US, and UK) elections who were babies when the World Trade Centre towers fell. They, and many others, were not born in 2003, when America and its “Coalition of the Willing” smashed into Baghdad.

There are millions in our countries now who have no direct memory of these events, or the attendant paroxysms that shaped our politics, our worldviews and our lives like no others in the past century.

A revival of David Hare’s 2004 play, Stuff Happens, is valuable for that reason alone. As this exciting production by WAAPA’s graduating acting students led by the visiting American director Gregg Daniel shows, there’s plenty more reasons to revive it – and for you to see it.

Hare calls Stuff Happens a “history play”, and that’s an apt description of a narrative that takes us from the earliest days of the Bush II presidency to the effective collapse of the Blair Government four years later. The characters are the players in the drama of the time – Bush and Blair themselves, Dick Cheney, Condoleezza Rice and Colin Powell, the British politicians Jack Straw and Robin Cook, Jacques Chirac and Saddam Hussein, the weapons inspector Hans Blix – all household names, heroes and villains, saints and monsters. More often the latters.

Hare has drawn from the historical record – interviews, documents, speeches (the title comes from a particularly heartless aside from the then US defense secretary Donald Rumsfeld about the carnage in Baghdad after the invasion), and filled in the cracks with astute dramatic invention.

It’s clear, concise (even at approaching three hours) and surprisingly even-handed. There’s a commitment to both sides of the argument that you associate more with a detached historian than an emotionally-charged playwright, and it produces some remarkable insights.

But Hare needn’t worry that his message is lost; the atrocious facts of the stuff that happened come through razor-sharp and damning; Hare shouts his message at us, but hardly ever raises his voice in the process; when he does, in impassioned soliloquys from a journalist, a Palestinian academic and Iraqi exile, the intrusion, though entirely legitimate, is as jarring as it should be.

This is also a perfect WAAPA play; each of the seventeen cast members (who else but WAAPA could even dream of mounting a play with such a number?) get their moment, and some of the cameos are star turns in their own right. Jessie Lancaster turning the urbane (and male) French diplomat Dominique De Villepin into a supercharged coquette is only the most outrageously striking example.

The physical ensemble work, coached by Sam Chester, provides exemplary punctuation to the dialogue and there’s some evidence of the house style of the Last Great Hunt, courtesy of Daniel’s dramaturgical assistant Chris Isaacs, throughout.
The contribution of dialect coaches is often overlooked, but it’s been a focus of WAAPA’s training since its inception. Luzita Fereday does a terrific job bringing a range of accents – some comic, some almost frighteningly authentic – to a huge roll-call of characters.

Her most impressive work is with the characters at the centre of the drama – Bush (Jarryd Dobson), Blair (Shannon Ryan – the show’s casting is gender agnostic), Powell (James Thomasson), Rice (Teresa Moore), Cheney (Adam Marks) and Rumsfeld (Michael Cameron). They all give believable, nuanced performances, in particular Dobson, whose portrayal of the often-ridiculed “Dubblya” is a revelation.

It helps that Dobson is a passing approximation of Bush in looks, and he captures perfectly Hare’s take on the president; courteous to a fault, ready to listen to all sides, diplomatic when he can and ruthless when he must. No fool. It’s an eye-opening characterisation, and a compelling performance.

And it emphasises how relevant the play is. If you think that Donald Trump is a novel phenomenon – Stuff Happens will make you think again!

Pictured top and below: the cast of “Stuff Happens”. Photos: Jon Green. 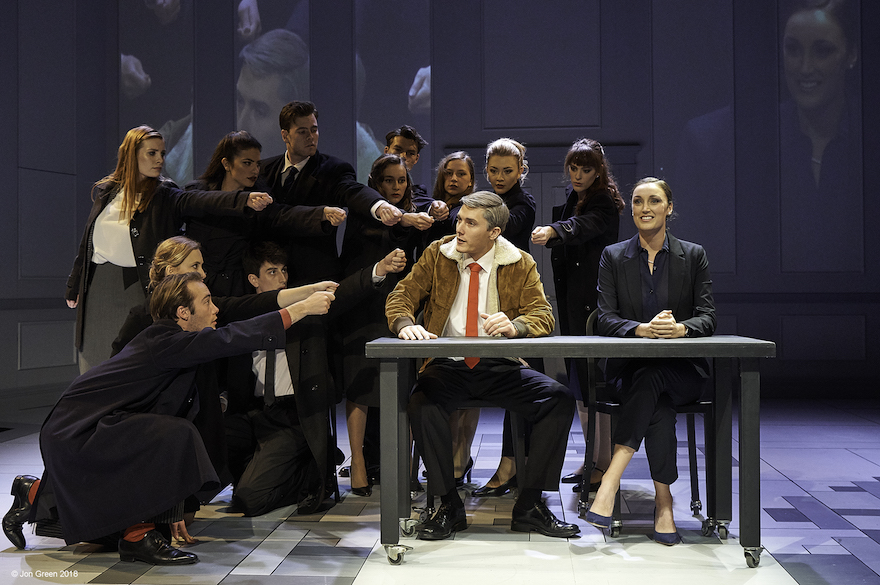 David Zampatti has been a student politician, a band manager, the Freo Dockers’ events guy, a bar owner in California, The West Australian’s theatre critic and lots of other crazy stuff. He goes to every show he’s reviewing with the confident expectation it will be the best thing he’s ever seen.